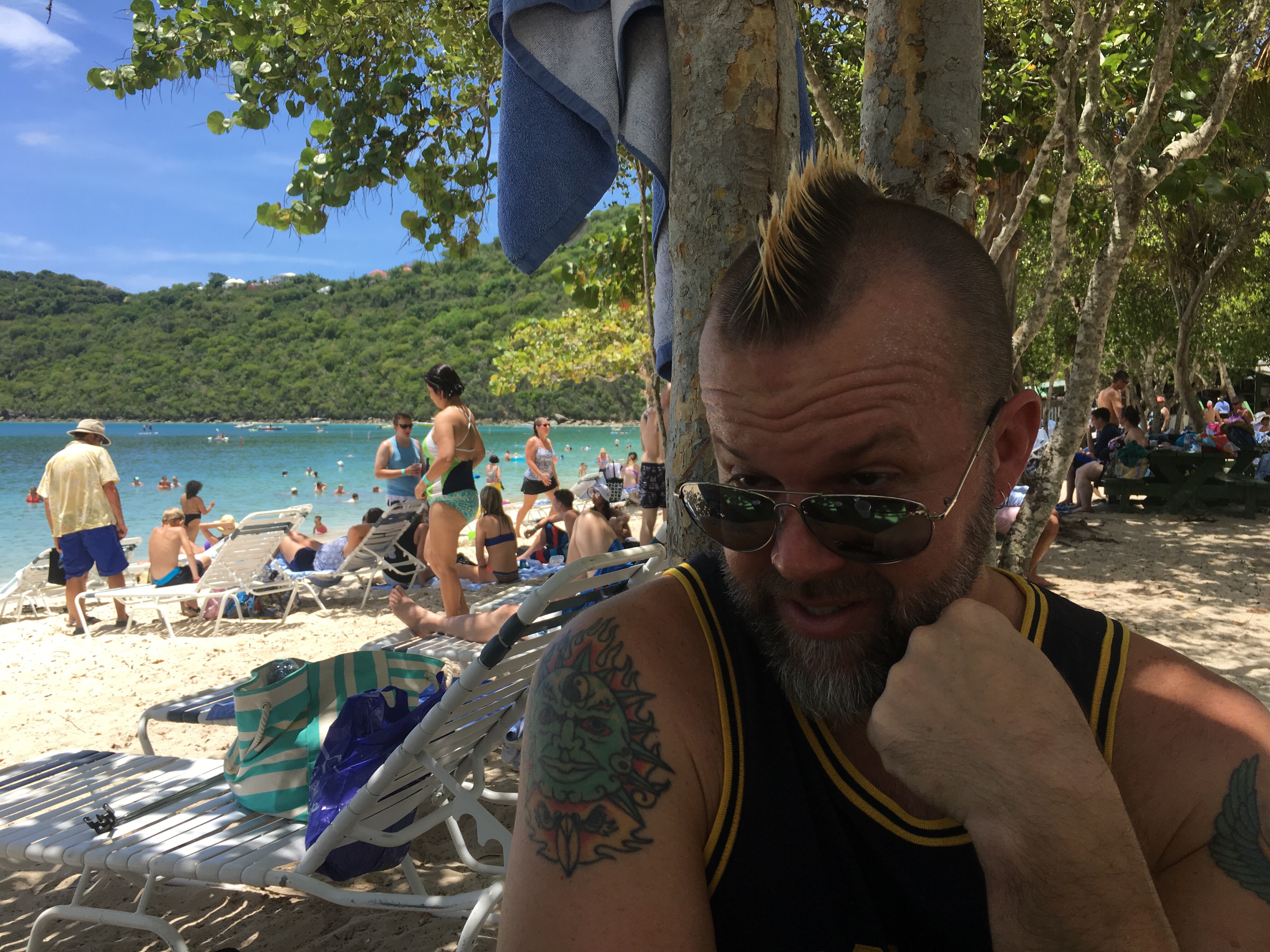 An email excerpt from my long winded spew to Jubal, just 2 weeks after an epic day with him, fucking off and day drinking around St Thomas, with me narrowly missing the cruise ship departure window. High as a kite, stewed to the bone, and somehow wearing his shirt. I missed it. He was hurting then, and perhaps had made up his mind already. I’m told his departure was preceded by an earlier attempt, just a few weeks prior to our day together. I read these words today and cannot understand how they were not interpreted as an invitation to fucking CALL ME before operating heavy machinery…

7.5.2016
But please know that everything you said makes sense: Your transit back and forth between warming yourself by the fire of companionship vs the natural internal heat source of spontaneous creativity. You may at this point in your life be feeling as though there’s no overlap between the two; a broken Venn diagram. I cannot assure you otherwise, for I too have felt these competing forces. I too used to create and write and think grand thoughts with ornate flourishes. However, that I don’t anymore is not something I either can or will attribute to Anna/family. I suppose I was just consumed by so many other levers to pull and moles to whack. I would encourage you to find new vigor and renewed spirits in the back and forth. They’re both essential to your well-being. Let’s call them symbiotic bodies around which you orbit, nourishing you in the gravitational pull of the one, while you long for and expect the slingshot into the other. This figure eight may be taxing for you; you may not have written so were it not. However, I wish upon you the strength (patience?) to find peace in these transits. It may be your special sauce. I may be what is making you who you are.

Then news of his success at completing his final solution. After buckling sobs and confirmation calls with long lost friends, here: an attempt to parse the shit and bile and anger of his suicide just a few days earlier, the warm comfortable blanket of bourbon and QWERTY. Never finished. Never sent. Never shared. Sent i suppose to Jubal. He was the only real audience or recipient to this spew.

8.7.2016
I’m just going to write to you as if I didn’t just hear the news today. The ball was in your court, reply wise. I was expecting an equally long-winded spew of a reply to my spew screed of guts and heart. But I thought I’d give you a little more time. I just always thought there’d be more time.

I seems clear to me now that there was more to this than just a horrible accident. I will for now bring myself just shy of calling it premeditation, for that just seems too bold a claim; one likely to have your beer come out your nose. Again. But all one has to do is look upon what you’ve left us to know this day fit snugly into your thoughts.

You’ve been carrying a lot of shit for as long as I’ve known you. You create such beautiful art, but you’ve always done so with such struggle. We all have baggage, but you always seemed to live out of your suitcase; always in transit with it; never truly experiencing the emotional stasis of emptying your baggage and stowing it under the stairs.

Your email last month mentioned as much. But your phrasing was one of struggle, not defeat. Your words have always been peppered with darkness as well as light. When one reads your words, they’re not the words of desperation, man! They’re the words of Jubal seeking a way. That when we hear from SAD THINKING MAN, the sad was just a means to an end, right?

Fuck. How did I miss it? I’ll go batshit if I keep asking myself that.

Rather, I’ll propose that you didn’t think this one all the way through. No one would ever accuse you of being pedantic. Nor would anyone who knows you think for one minute what Jubal did or did not do required a rats fart of approval from anyone other than Jubal. As closed-off as you may have felt in those last couple two three hours, had you fired up a flair, a smoke signal, hell: interpretive dance your cry for help – had you said some fucking thing, I’d have been there.

I’ll be there for you in a heartbeat.

Easy to say right? No doubt: True. But help and hope are odd birds, man. They can and often do come from the simplest of things. Like plans, for example. The making of plans. The WHAT IF of future plans. The foggy memory and inflated half-truths of past plans. The seeds of some future road trip. The notion that you would get along with _____ who also plays guitar from that place way down deep. As simple as they are, the mere presence of even loose plans could have been that one fucking thing that kept you on the line and out of the shit.

We were going to Tucson in November. We were going to stay at Hotel Congress and walk the All Souls Procession. That was MORE than a plan. That was something that you became full-body animated about when I brought it up on Island. I had it all planned out and spewed all the details to you in that last email. Dammit if you wouldn’t have dug it the most.

I would here continue on with my bit about how we are an amalgam of our friends, that we are indeed a construct of who our friends and family have made us. It is a mantra I’ve been feeling really hard these past few years, for reasons I already went into. But what you’ve done, you little shit, is put a bit of stank on the concept. It’s also what our friends and family DO that have an impact on us. That the actions of our friends have objective rhythm upon OUR lives. We are perhaps most accustomed to this when our friends visit us, or send us shit, or @mention us, or tag us in photos, or ring us up and tell us to meet them round the fucking pub. You know, the good positive life-affirming things they do that define them as our friends and good people in general.

Not talking here about the bad that HAPPENS to our friends. Those too effect us in some part; in some small way. There’s little ambiguity our empathy for our friends nudges our lives by a few degrees.