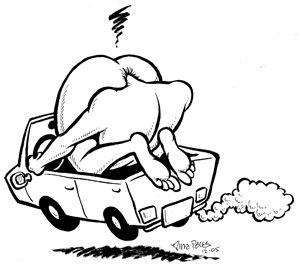 21650. Upon all highways, a vehicle shall be driven upon the right half of the roadway, except as follows:
(a) When overtaking and passing another vehicle proceeding in the same direction under the rules governing that movement.
(b) When placing a vehicle in a lawful position for, and when the vehicle is lawfully making, a left turn.
(c) When the right half of a roadway is closed to traffic under construction or repair.
(d) Upon a roadway restricted to one-way traffic.
(e) When the roadway is not of sufficient width.
(f) When the vehicle is necessarily traveling so slowly as to impede the normal movement of traffic, that portion of the highway adjacent to the right edge of the roadway may be utilized temporarily when in a condition permitting safe operation.

21656. On a two-lane highway where passing is unsafe because of traffic in the opposite direction or other conditions, a slow-moving vehicle, including a passenger vehicle, behind which five or more vehicles are formed in line, shall turn off the roadway at the nearest place designated as a turnout by signs erected by the authority having jurisdiction over the highway, or wherever sufficient area for a safe turnout exists, in order to permit the vehicles following it to proceed. As used in this section a slow-moving vehicle is one which is proceeding at a rate of speed less than the normal flow of traffic at the particular time and place.

21659. Upon a roadway which is divided into three lanes a vehicle shall not be driven in the extreme left lane at any time, nor in the center lane except when overtaking and passing another vehicle where the roadway ahead is clearly visible and the center lane is clear of traffic within a safe distance, or in preparation for a left turn, or where the center lane is at the time allocated exclusively to traffic moving in the direction the vehicle is proceeding and is signposted to give notice of such allocation. This section does not apply upon a one-way roadway.