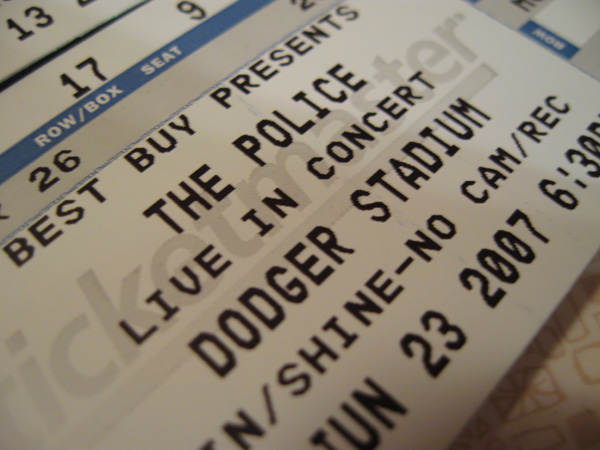 from moment to moment, i brush it off as just another one down in that long list of fifty-something rockers who decide to bury whatever hatchets and go back out on tour. but then, i am reminded of the nostalgia surrounding this bands internal feuds.

i recall how at the height of stings 1990s popularity, that it was stewart copeland that was the bad seed and couldnt get along. but then, time went on, and simple resurgance of interest in the back-catalogue feuled interest in why men of such synergystic genius werent still banging out anthems.  why?

consider how well U2 brought a very large and alienating ZOO vessel back on course to produce their best studio album since Unforgetable FIre. their VERTIGO tour, for its size, was fucking breathtakingly effective. almost surgical in its ability to carve life into musical reminders that, amidst two towers down, and two wars, and the poverty their pricetag could erase, and ubiquitous shallow self-promotion, amongst all that craaap…. that CARPE DEUM is never more than an arms length away.

anyone can get out there and be passionate and emotional. problem is, we’ve grown to confuse enthusiasm with talent.  we almost crave those without talent for the sheer entertainment value of creulty.

the police were not just at the right place in the right time.  they spun a top in the 80s that never stopped spinning.   those who can listen can hear their influence in well over half of what passes for cutting edge music these days.

sting more or less proved his acumen at crafting epic sonic tales for generations to come.  the police reunion, though, seemed doomed in my mind. a feeble wet dream adrift in a sea of musical mediocrity.  i distinctly remember having conversations where i was willing to bet my pinky toe that i’d get to see a SMITHS reunion before i saw THE POLICE.

well, here we are. Morrissey has a thriving career, which no one can doubt will come first over that sake & sushi dinner with Marr or Rourke or Joyce.

but what both frightens me and emboldens me is the prospect of a fresh POLICE studio release. i sincerely want to doubt that these old gits are more motivated by the seven-zeros at the end of the contract then they are by what musical journey might lie ahead. and for that, they might tolerate whoever the other bandmate has become after all these years. (are the wives friends?)  we’re not talking seperate tourbuses. we’re talking wholly seperate entourages on different air carriers.

but if it works out. if whatever fucking magic of music-making they shared back then is still arcing and able to be kindled into flame after all this time. man, i’m hoping there might be something on the other side that’ll make sense & get me some Hope.